Back to Resources
Using HeyTaco! a Slack-app plugin to design an employee recognition program.

How to design an employee recognition program that is Agile at its core; Self-managed, Self-organised and Self-maintaining.

Getting your employee recognition approach right can be tricky, and it can often mean the difference between losing and retaining Taco-worthy employees (keep reading, you’ll learn what that means). Designing an approach that aligns with your company’s values, that is feasible/easy to implement and won’t cost an arm and a leg in resources and time allocation… hmmm yep, tricky does come to mind, but unachievable doesn’t!

Many of us know how important it is to reward and recognise employees in the modern workplace. The best employee recognition programs promote high levels of employee engagement which often lead to high performance and happy customers; so it’s important to spend time taco’ing ’bout it!

Now more than ever before, the workplace is dominated by a new generation of employees (like me!) who feel empowered to speak out about what best recognition practice looks like to them, on a personal level and beyond. As individuals, our expectations have changed. Damn right we’ve become fussier! Therefore we, as HR representatives, leaders, business owners, and do-ers can no longer get away with rolling out traditional approaches that are rooted in top-down culture thinking. They just won’t stick!

A bit about EPIC for context…

EPiC is a Business Agility & Agile Transformation consultancy, which means that the majority of our employees are facing into different clients, globally. Having a geographically dispersed team who are dedicated to different clients does have its challenges; it’s because of this that we are heavily reliant on Slack as our day-to-day communication and collaboration tool.

A few months ago, I noticed that the platform was particularly quiet (think wind sweeping up tumbleweed through a deserted town….quite!). As someone who was then new to the organisation, I was curious to learn what everyone’s days involved, what they were achieving and also what their frustrations were. I wanted to arrive at an approach to recognition that didn’t feel like it was forced onto our employees but instead something they were excited about… and better yet could be in control of.

Given we were already using Slack, it made sense to install the HeyTaco plugin that is connected to Slack. With HeyTaco!, whenever anyone inside the organisation would like to add a little happiness to someone’s day and recognise something awesome they’ve done, tribe members can give them a taco and include a nice message. 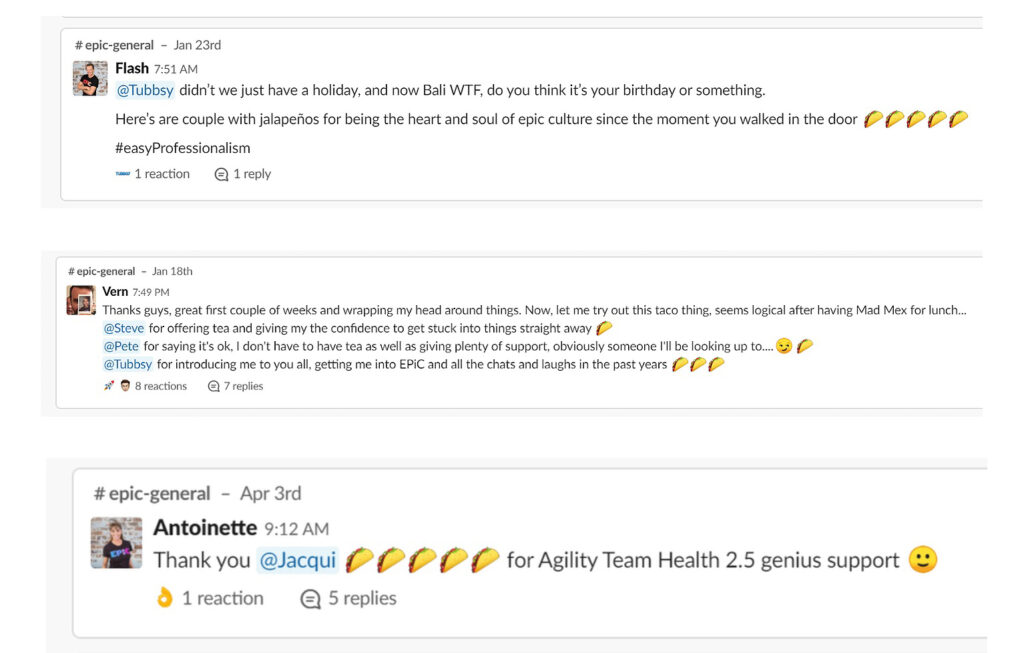 So what were the results?

“Almost immediately, there was a noticeable, positive change in the overall tone on Slack”

Within the structure of a consultancy often it can be difficult to master and continue to increase transparency levels. With employees sharing each others win’s via HeyTaco!, we managed to increase the information sharing and as a result, the overall organisation felt more connected and up to date with where clients, teams, and individuals were at.

After the introduction of HeyTaco!, our employee engagement levels have increased significantly and we are continuing to experience situations where EPIC employees go above and beyond their primary role description. One recent example involves an EPiC employee creating an EPiC app on his weekend… Just because he felt empowered to do so!

After the team began to actively use Taco’s for recognition, we wanted to further support that. Each month the team member who receives the most Taco’s is able to expense a real taco meal for themselves and their family (in exchange for a photo for our Taco Wall of Fame). That’s what I’m Tacooooo’in ‘Bout!

HeyTaco! works for us at EPIC, but that’s not to say it will definitely work for your organisation… so here are some tips to keep in mind when designing your approach that will ensure your reward and recognition program is Agile at its core; self-managed, self-organising and self-maintaining – where the leader’s role is to get out of the way and simply support the team. Tell me what leader doesn’t have time for that!

Get your people involved from the beginning…

We trialled HeyTaco! for a week and asked the tribe if they wanted it to stay. They voted and HeyTaco! became a permanent team member.

Ask your staff how they WANT to be recognised before you spend time and money on trying to land initiatives that may not resonate with them. Most often what staff really want can be fairly simple to design and easy to implement. Your role in this is simply to experiment until something sticks. That’s exactly what we did… it worked. But if it didn’t we would have just kept experimenting until the right program worked for our people.

Hand over the power…

Forget traditional approaches that are top-down and rely on leadership to recognise staff. Ensure that whatever approach you decide on allows for peer-to-peer and cross-region teams to recognise each other irrespective of their job title or level of seniority in the organisation. Put the onus on the team and watch them celebrate each other… and then celebrate that because it’s pretty awesome to witness!

Don’t get caught up on the size of the reward…

At EPiC, using HeyTaco! has successfully taken the focus away from the reward and it has helped us to call out awesome behaviour.

Do your research and make sure the estimated cost of your approach for the business is sustainable as it continues to grow! At $1.95/person each month, HeyTaco! is cheap as corn chips in comparison to some other more extravagant recognition and rewards programs!

What was the thinking…

THIS WAS AN EXPERIMENT! It just so happened that it worked for us. Don’t waste time crying over spilt milk… (or broken taco shells) if the first approach you try doesn’t work for your organisation… just give something else a go until the right approach sticks! Be open with your staff members and let them know it’s an experiment so they can give constructive feedback and help to improve it. If you are constantly refining and redefining your approach with these tips in mind… you will get there!

Let us know what ends up working for your organisation!